There are a lot of questions surrounding recommendations/suggestions for building a CCNA-Voice Lab. No, this won’t be a definitive guide, as there are many possible roads to travel and variations on a theme. But it might give you ideas for what is needed, what the course topology is, what could be added, and what is possible. This configuration is basically what I used, with the exception of the UC-500, to complete the course.

For those thinking of the CCVP track, I’ll try to highlight what can be reused moving on.

Please treat this as a work in progress, and I hope some find it usefull. I’ll try to update it (and proof read it better) as time goes on.

For those wanting to build a CCNA-Voice Lab from GNS3, you’ll need to look elsewhere, I personally prefer real “touchy”, “feely” hardware where I can.

So you know where I’m coming from…
Passed my CCNA in December 2007, passed my CCNA-Voice in June 2009. I’m currently studying towards my CCVP (almost completed CVoice) having come from a TDM PBX background and unfortunately am yet to put any of my investment in CCNA/CCNA-Voice knowledge to practical use, so I don’t have all the answers. This is basically what I’ve learnt as I’ve muddled through it.

I’ve broken the Lab down into;

For all routers and switches, install as much flash/dram as is required (see Cisco Feature Navigator hxxp://www.cisco.com/go/cfn for details), and the more recent the IOS version and hardware platform the better. I’ll also indicate what equipment I used that worked well for me as a base-line.

Console PC
I’ve provided an address for where the software is free, or freely available from Cisco with a guest CCO login (yes, you can get some things from Cisco for free). If the links don’t work, just use you’re favourite internet search engine.

A moderately expensive item that you can probably get by without for the course and just rely on the Study Guide and the CBT. I always like to have hardware to play with so went hunting on eBay. Make sure if you do get one it comes with the CUE software installed. I took a punt and bought the lowest cost one I could find, that had had the HDD wiped. So had to go searching for the software, fortunately…

The study material indicated that there are 2 ways to re-install the software, but these make the assumption that software also pre-exists on the HDD. If you do buy a wiped one (and save money) there is a 3rd method found in the CUE installation docs which involved using the boot loader. Think of this as the CUE equivalent of a routers boot ROM. If you need this info, just PM me and I’ll pass it on.

There are a few variants of CUE and depending on your router model will determine which one(s) could be right for you.

Not really required, but very handy for time synchronisation to an external NTP source, and saves doing a set clock on multiple devices. Public NTP servers can be found at;

It’ll also be handy to know where to find these if you move on to CCVP. Don’t be supprised if it takes 10 minutes or more for your devices to sync to the correct time, it bugged me for a while. If you’re using a syslog server to capture all of your output instead of using the console, it’s easier to have all your devices, both routers and switches synchronised to the same time source.

OK, there’s no easy way to say this, it’s a big ticket item. Cheapest I’ve seen is about AU$3000 for the wireless model, without handsets.

On the plus side, it has almost everything for the SO/HO in one box, DHCP, PoE, FXO/FXS, CME/CUE.

It has it’s own GUI and configuration manager;

For those that can’t afford one of these to practice on (and I’m one), print out the screen shots of each tab of the interface and set yourself some scenarios (set up 2 phones, with voicemail, maybe a hunt group too). Unfortunately this won’t give you the answers, but it will get you familiar with the interface.

———-8<----------
If there is interest out there, I’ll set up a shared folder on 4shared with the Apps and any docs I can think might be usefull. With the moderators permission that is, I don’t want to break any rules. 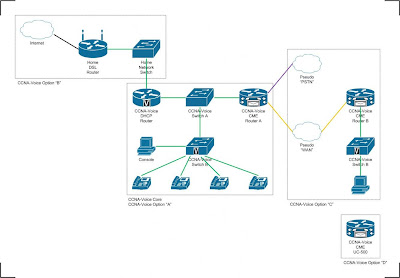 By studyshorts:
My CCNA Security study notes were very well received, I had lots of positive feedback and it has been downloaded about 160 times. I thought it was about time I did the same to the notes I put together from when I was studying for CCNA Voice, well here they are. Just follow the link to download.

If anyone else would find it a help download it here:
CCNA Voice Study Notes